The introduction and architecture to the LAN uptime system that I have added to my ASUS/Merlin router has been described in a previous post.  This post will focus on the Lambda function that plots the graph of the outages.   The code for this lambda function can be found at the bottom of this post.

I’ve actually forced myself to finish up some other posts before getting to this one.  This particular piece of functionality involved overcoming a few hurdles I did not anticipate.  In other words, frustrating and ultimately fun.

To start with this lambda function is supposed to take data from a DynamoDB table and create a plot of when I have had issues with LAN uptime with the three channels; Wired, Wireless 2.4 Ghz, and Wireless 5 Ghz.  My first attempts were to ignore the 3 channels by summing them together and then to plot each week of data as a separate line in a plot.  It looked like this. 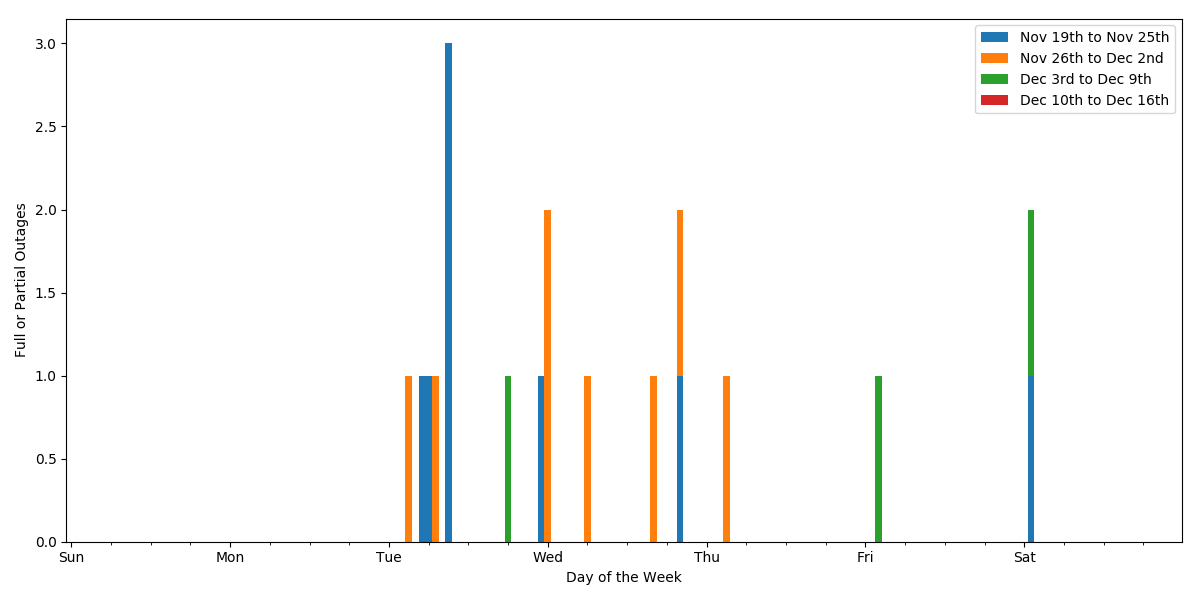 It it did reveal a nice pattern of Tuesday through Thursday problems.  But this did not contain the detail on the channels so in the end I settled on this.  Note, this is the live, daily updated, plot. 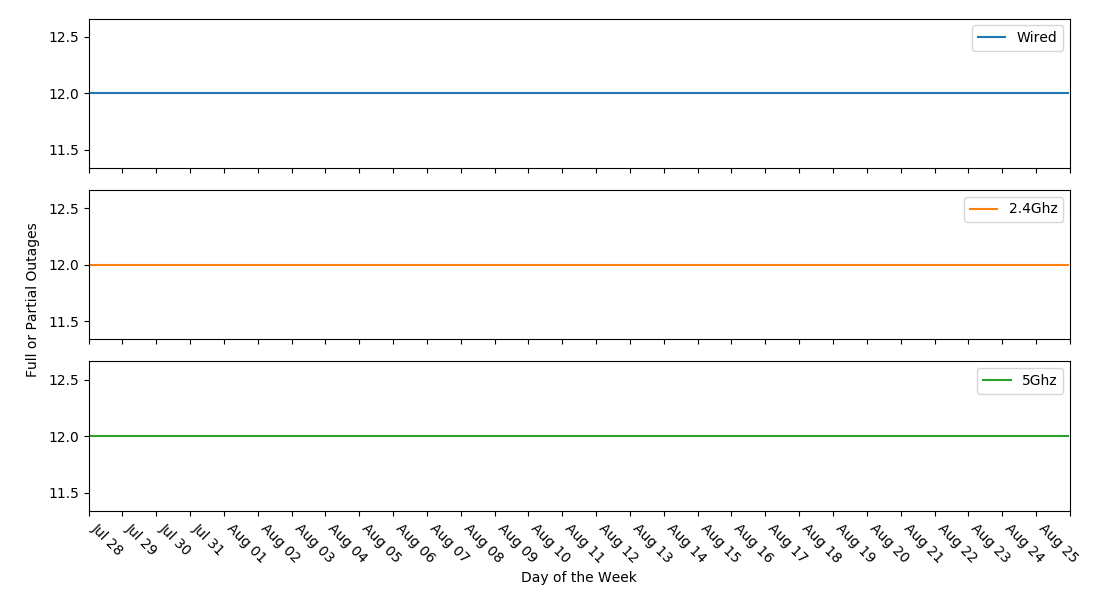 Nice thing about Pandas and Matplotlib libraries for python, is that most of the work is done for you.  both graphs are roughly the same number of lines of plotting instructions.  The big difference is that the first version required a different organization of the data in a dataframe.  The second version is a much more straight-forward set of data in a dataframe.

While coding all of this I ran into a problem.  The Python libraries for Pandas and Matplotlib are not available on Lambda.  I certainly don’t want to code all of this by hand.  Surely there is an easier way.  Google!  After doing some research I found that I needed to create my own deployment package and use the command line interface to upload the deployment package to Lambda.  After getting into what this means I had a revelation of sorts.  Lambda is a dumbed down version of Docker.  I should have known this all along, but it really clicked a bunch of things together for me.  So I had to build a deployment package.

Start with spinning up an EC2 instance with the following:

With that background, I can go into the python function in more detail.  First is the initialization of some variables.  The table keeps a moving 31 days of data.  I didn’t feel the need to mess with the partial day at the beginning and end of the window so I decided to use 29 days in the middle.  Yes, I could go 30 days, but I wanted to be sure about edge cases.  Also, the dataframe is going to use an index that I call the DayHourId, but that value is going to be worthless in a plot, so I also initialize a variable called xlabel that will be populated as the days are processed and eventually assigned to the x-axis of the plot.

Then the dataframe is initialized.  Each row of the dataframe will represent the status in a 5 minute window.  The index will be the unchanged integer values and the four columns are:

Now the dataframe can be aggregated by DayHourId which will result in 29 * 24 = 696 rows which will be a good amount of detail in a plot that fits on the typical screen.

I added a step where the dataframe was exported as a CSV file to /tmp.  I used that file with my own local copy of Jupyter notebooks to tweak the plot into a form I liked.

For the plot itself the first line of that section of the function creates the plot.  The rest is used to create the axis labels and replace the X axis values with the xlabel array of values (MMM DD).  The last line saves the plot into a PNG file in /tmp.

The final step is to move the CSV and PNG files to S3.

I had a lot of fun with this function.  The code is below.